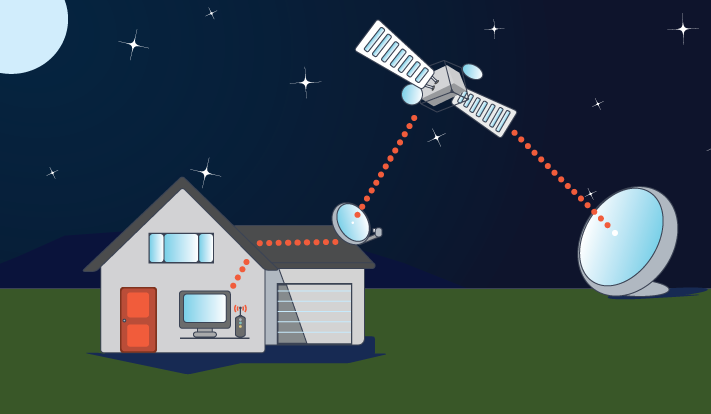 Broadband internet via satellite will experience a major breakthrough in 2012. HughesNet, one of the giant U.S. Internet service provider, has launched a new generation satellite internet. New satellite named Jupiter is able to transfer data faster than previous satellites, Spaceway. Subscription price and Satellite internet speeds offered have not been determined, but the download speeds estimated 20 megabits per second (Mbps), or 10 times more than existing. Hughes Satellite Internet promise it will be provided with reasonable prices.
This is good news for more than 10 million Americans who do not have high speed internet access, where the speed is only about 256 kilobite per second. U.S. Federal Communications Commission to provide a minimum speed of 4 mbps download and upload (upload) 1 mbps.
HughesNet service relying on it to find a profitable market in the aspect of a home outside the metropolitan area. Compared with other services, satellite speed internet market is beneficial because it only has one million customers and 1 percent of the broadband Internet market.
In contrast, satellite TV has been holding one-third pay-TV market and has more than 30 million subscribers. While satellite radio has about 20 million listeners.
Satellite Internet can not compete with terrestrial broadband speed such as cable and DSL (digital subscriber line). Conversely, HughesNet as the largest provider of these services and has 550,000 subscribers, and its main competitor, WildBlue, targeting the customer who has an Internet connection very slow. Cable and telephone company which is a conventional broadband providers, often refusing to add broadband infrastructure in sparsely populated areas because it is not profitable business, says vice president of North American division at Hughes Network Systems, based in Germantown, Peter Gulla.